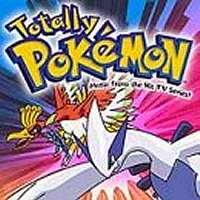 Totally Pokémon (2001) was the second TV soundtrack released for Pokémon. It includes songs from "Pokémon Karaokémon" as well as karaoke versions of these songs.

Some versions of this CD come with a bonus instrumental disc featuring the instrumental-only versions of all songs. If your copy of Totally Pokémon has "2CD" on the CD case you have the bonus disc. (Mine doesn't have it; my friend's brother's copy has it.)