Fourth generation Pokémon are finally being released, and we'll keep you updated with all the latest monsters here!

The most recent Pokémon to be announced was Manafi: 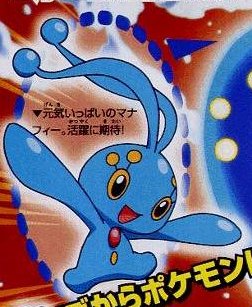 Looks like a Water type, and apparently is the Mew/Celebi/Jirachi equivalent in the 4th generation. Those eyes freak me out. o_o For more scans of Manafi from the February 2006 (I think) CoroCoro magazine, click here. The magazine also features silhouettes of three more Pokémon:

In my opinion the one on the left looks a lot like Mantine, but the things on top of its head are bigger in relation to its body. A pre-ev maybe? The middle one looks like a freakish cross between Magby and Slowking, but I think we can pretty much assume it's not related to any of those. I was sure the one on the right was a scythe murderer Spearow, but apparently it's got some kind of music note body. :< I wanted a scythe murderer Pokémon.

Gonbe is Snorlax's pre-evolution, appearing in the 7th Pokémon movie (the one with Rayquaza). Its English name is Munchlax. Gonbe, unlike its sleepy evolved form, is playful and active. It enjoys eating apples and trash.

I made the sprites, so if you use them for anything you should credit me (Jedi_Amara) and TPP. For more info, just contact me. And if you think it's easy to make a sprite by simply shrinking a GIF, think again. 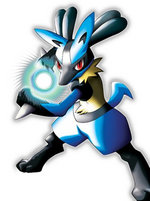 Rukario is the star of the 8th movie, Mew and the Wave-Guiding Hero.

Bonsly is Sudowoodo's pre-evolution, and like it is a rock disguising itself as a plant - in this case, a cute bonsai tree. It's shy and cries a bit. When it sleeps, it retracts its legs into its body so it wobbles. ^___^ Its first appearance is in the 8th movie.

Manene is Mr. Mime's baby form. It's a little Pokémon that likes to dance and is good at mimicry. It's first seen in the 8th movie. It scares me.

Manyula is the evolved form of Sneasel. Manyula like to stay in pairs and are very mischievous. Again, it is first seen in the 8th movie.