*thinks* Aha! I found it! Uh... as I was about to say... Japan's national airline, ANA, has an affiliation with Pokémon, and it has a fleet of jets painted with Pokémon characters! It recently launched a new one, a Pikachu jet named "Pikachu Jumbo". This is the layout of the jet (click the picture to see the full-sized version):

Pictures of the launch: 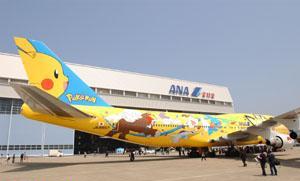 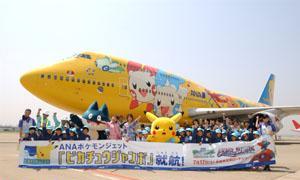 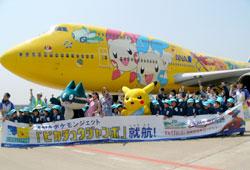 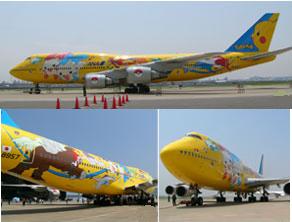 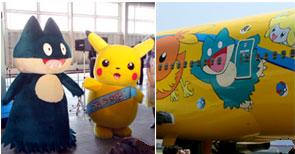 Info on the other jets in the fleet soon!

Plus, on their flight schedule they have Pokémon pictures! My dad brought me a couple of different schedules back from Japan (he tries to get me some Pokémon stuff whenever he's there); I have February/March 2004 and July/August 2004 XD. That's what I was looking for before XD. Here're scans; please don't take them for your site without asking... click on small pic to see full-size pic as always... (You can tell I'd figured out how to use the scanner by the time I scanned the second one, the first one looks... odd XD)