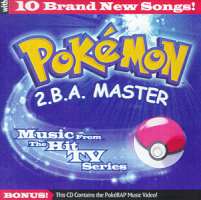 2BA Master (1999) was the first Pokémon soundtrack CD released; it features songs from the TV show, including the full versions of songs on "Pikachu's Jukebox" (shown at the end of Orange League episodes).

The CD also contains the full version of the PokéRAP music video.